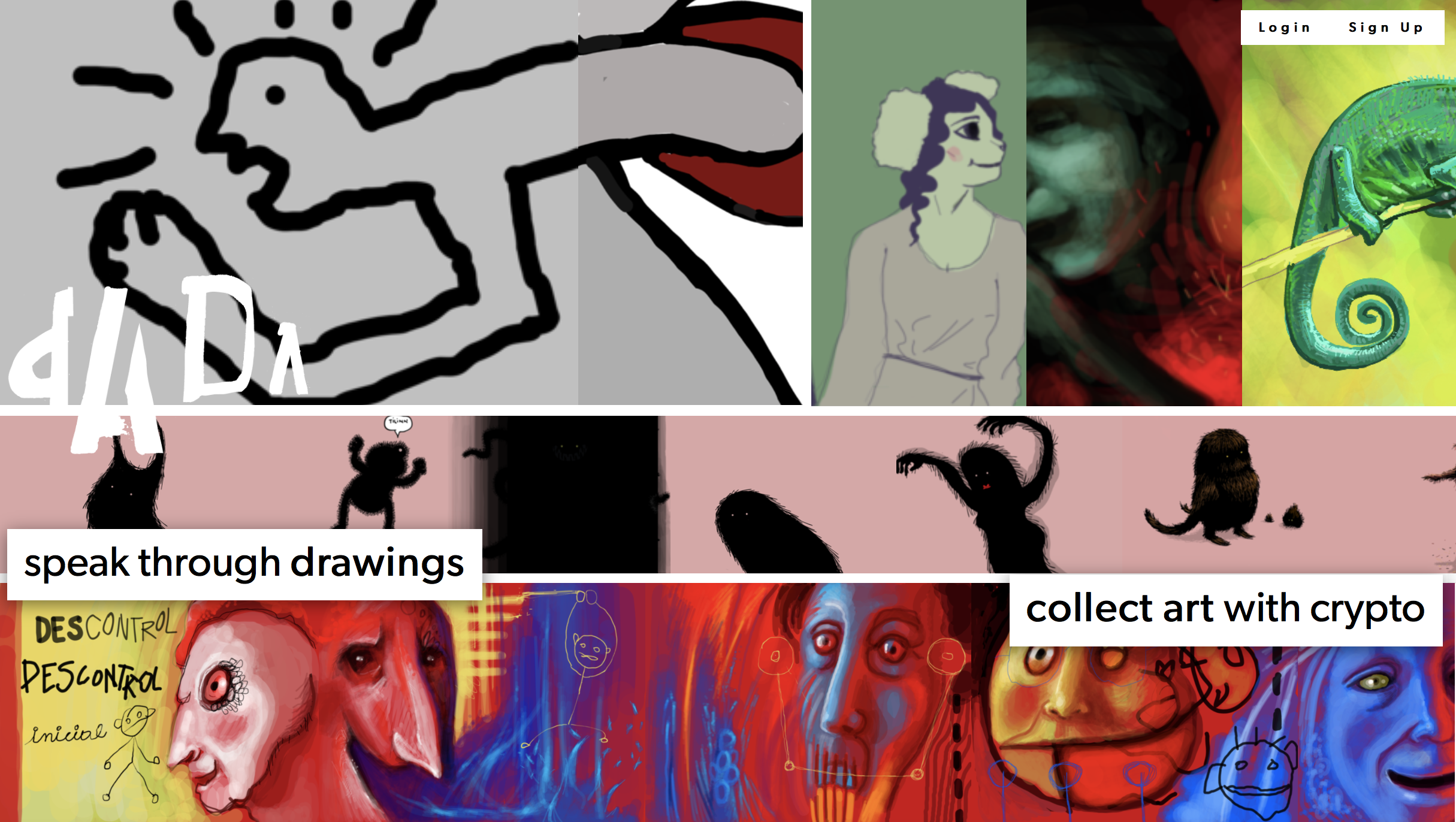 DADA’s Invisible Economy allows a global community of artists to create collaborative digital art driven by intrinsic motivations, and receive a social dividend regardless of the free markets, while creating collective long-term wealth.

SDG 8 - Decent work and economic growth The vast majority of artists, whether they are independent, fine, commercial, or amateur, cannot make a sustainable living from their chosen profession. They hold multiple jobs. At the same time, millions of talented people could make a living from their art but are discouraged by the economic realities of being an artist. With the Invisible Economy, DADA has created an economic model where artmaking is radically separated from the market, allowing people to make art freely without the pressure to produce and to be rewarded with a guaranteed basic income for their participation in the community. This model includes a system of intrinsic incentives that reward the participation and collaboration of artists, art lovers, and art collectors. SDG 9 - Industry Innovation and Infrastructure X: Our token model doesn’t rely on money as the main incentive for participation. We are taking blockchain technology and economics apart and putting it together in an entirely counterintuitive way that it is resulting in a completely new model not seen in crypto-economics yet. Our idea is to create a new crypto-economic pattern other communities can use in their own way. SDG 10 - Reduced inequalities Our token economic model subverts some of the biggest drivers of extreme inequality today. 1. Instead of star systems that disproportionately benefit some people over others by amplifying inherited advantages such as wealth, race, gender, and talent, our system is open and rewards contributions based exclusively on passion, effort, and value created. 2. Instead of winner-take-all markets that are based on competition, scarcity, and speculation, and which produce extreme inequality, we are separating the market from the community which functions as a gift economy. All financial and market interactions are “invisible” and happen in the background, managed by smart contracts. 3 The biggest driver of inequality today is the unequal ownership of capital used as financial instruments to generate capital gains. We are leveraging finance through our token but the community owns the system and the art it produces through the commons, which generates social dividends for all contributors. SDG 11- Sustainable cities and communities The Invisible Economy coordinates communities to create collective value based on interdependence and altruism. This value is owned and controlled by the communities and it is radically separate from the markets. Our use case is art but this model could work for other communities such as scientific research, investigative journalism, and open-source engineering, among others. SDG 12 - Responsible consumption and production Using NFTs (artworks) as a medium of exchange form of currency, the Invisible Economy provides a new framework for the commercialization of art that does not rely on speculation and artificial scarcity, on exclusivity or gatekeeping but on an incentive framework based on intrinsic motivations, collaboration, and altruism, which is a layer on top of our gamified system for collaborative art. This will spur a decentralized, self-governed community that pools the revenues made by art transactions to benefit all its members, not just a lucky or popular few artists at the top, or a few wealthy, powerful collectors. NFTs allow for remixing, which with the correct attribution and distribution of remuneration via blockchain smart contracts can exponentially multiply the value created by each artwork.

DADA has over 160, 000 registered users and the community has created over 120,000 artworks on the platform. We know that less than 500 artists alone have created around 80,000 artworks. Crypto art, on the other hand, has seen a surge in sales this year of a market cap that is around 10MM, with 6MM last month alone, and we know the crypto art market is in its very early stages. Currently DADA has the largest collection of rare digital art in the world. We believe this art can be sold automatically on all the NFT marketplaces and generate enough revenues for the contributors. Our business model is the token economy,. We believe that if we can show that the model works at this stage, we could scale the system through network effects to millions of people around the world.

Only 1% of all artists capture the value created by a global art market that is opaque, elitist, inaccessible to most people, non-inclusive of women and minorities, and driven by speculation. But millions of people around the world are artists who struggle to make a living as such. The mission of DADA’s Invisible Economy is to end the paradigm of the starving artist worldwide and to do so through intrinsic motivators, away from speculation and ruthless competition. Beatriz Ramos ,the creator of DADA, is herself an artist and was a successful commercial artist with her own animation studio. Even then, she captured only a fraction of the value she created. The emergence of blockchain and the creation of rare digital art allow for the first time to scale the creation and collection of art to millions of people, creating an emerging market for a broader swath of artists around the world by creating a self-governed token economy in which artists get a guaranteed basic income for their contribution to the community.

Rare digital art is a proven use case for blockchain and the creation of an emerging market of ownable, sellable, attributable unique digital content. Blockchain is also the only way to create an efficient DAO and an economic ecosystem of self-governed community rewards, which is decentralized through smart contracts that automatically distribute allocations and enforce contract terms trustlessly. A token economy allows us to organize economic activity according to our values, completely separated from traditional ideas about economics.Moreover, our proposal is to make all economic transactions invisible in order to preserve people’s intrinsic motivations. Blockchain allows for this economy to also be transparent since it will be run by smart contracts and everyone will be able to track all transactions in the public ledger.

Concept Definition
Support of B4H Goals
External Funding If Any

Mostly self-funded by the founders, we have received $600,000 from outside investors. We intend to fund the system development through a token bonding curve, in accordance with the values of The Invisible Economy.

The DADA visual conversation platform has been operating since 2014. We have over 160,000 registered users and over 120,000 native drawings made on our platform ready to be launched as NFTs. We launched our first rare digital art marketplace, one of the pioneer crypto art projects, in October, 2017. We published our white paper, The Invisible Economy, in June 2020. We are currently designing DADA’s token economy at the token engineering level. In parallel, we plan to launch our marketplace to start selling digital art. 1- Through RadicalXChange, we have put together a working group of about 50 people, some of the most interesting minds in Blockchain, crypto art, behavioral science, system and mechanism design, product UX architecture, mathematics, internet activism, legal, and governance. We will work together to reach specific milestones. 2- Garrett Peek, our long-time advisor and the designer behind hit app Draw Something, will be designing the architecture of our marketplace. 3 - We took an immersive Token Engineering course with two crypto artists, an artist and mathematician, and an artist and currencies researcher. Together, we developed the first value flows for the system. Sebnem Rusitschka, our instructor, is creating the design of the system model. Next milestones: Finish the design of the contribution metrics, value flows, and governance mechanisms, then do simulations on CadCAD. Test with our community and launch the token.

Your submission has been received. We will contact you shortly.
Oops! Something went wrong while submitting the form.
HomeTeamPartners & SponsorsLegal
EventsBlog
2021 Awards2020 Awards2019 Awards2018 Awards2017 AwardsApply
Join UsDonateFundraising

design by  Click.Blue