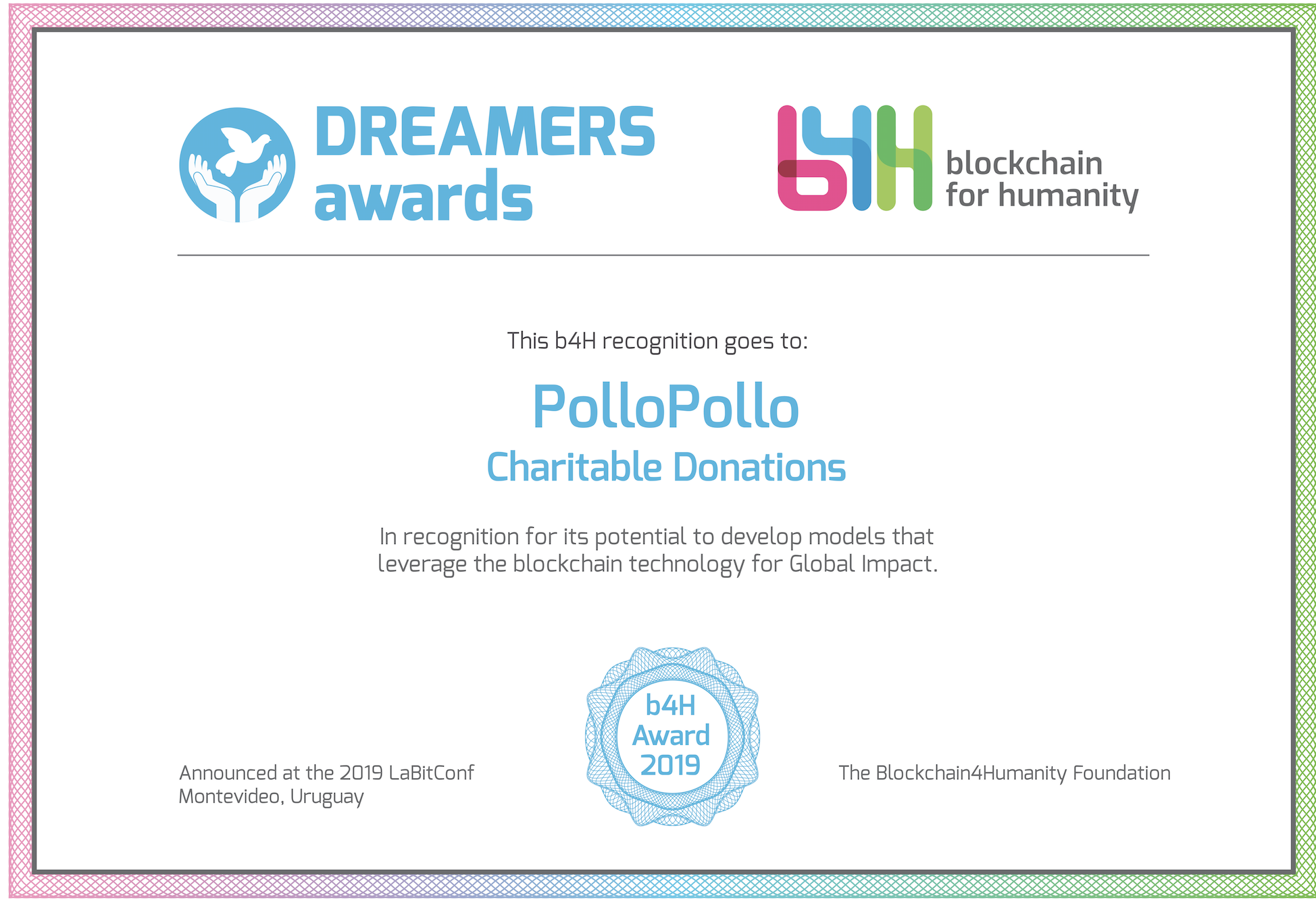 Moved by the unsustainable situation suffered by Venezuelans lack of food, this projects sets out to build an intermediary for charitable donations of physical products governed by conditional payments from a donor to the producer/shop subject to the recipient's confirmation of the physical product.

The model introduces what I describe as instant tokenization of physical products, allowing people in need with no IT skills, no IT device of their own and in areas with no or poor internet-connectivity to benefit from the major advances being made in distributed ledger technology.

"Currently, as the project is still in an early stage, roughly 150 donations have been carried out. By allowing recipients to reach out to shops/merchants that has products they need, the platform has a huge potential to grow organically without particular need for an onboarding process of new participants. While the project is primarily focusing on Venezuela right now due to the cooperation with 2 students from the Simon Bolivar University in Caracas, Venezuela, the platform is open and transparent and allows it to be used as a medium of charitable donation throughout the world. The technology applied also holds a vast potential for regular established charitable organizations looking for ways to counter fraud, administrative costs and embezzlement from potentially corrupt local NGOs."

"Charitable donations have been found to be extremely inefficient, prone to fraud, embezzlement and political influence. Based on tax filings, it has been proven that as little as 70% of donated funds are spent helping those in need. Costs for administration, logistics, control and shady activities such as government bribes, all take a huge cut in the donated funds. The PolloPollo project provides a disruptive new economic model that eliminates all of those problems. Donated funds goes directly from the donor to the shop/merchant/producer providing a physical product that an applicant applied for. There are no large quantities of goods being hauled by trucks, potentially stopped at borders or being stored in large quantities at warehouses thereby tempting local gangs or corrupt guards to take advantage of the situation. Donated funds are injected straight into a local community thereby resulting in increased revenue for small shops and merchants or even private producers. Donated funds aids the local community in general as increased wealth will circulate within that community, hopefully causing the seed for prosperity that a poor area so desperately need. So apart from the lifesaving direct impact of helping e.g. a mother afford infant formula for her child because she isn't able to produce breast milk due to her own starvation or malnutrition, the PolloPollo project has a far greater indirect potential of genuinely disrupting any existing economic models where revenue of humanitarian aid ends up with large corporations providing the aid, to instead let funds improve the quality of entire communities."

The entire project is built upon distributed ledger technology. Donations are locked on smart contracts and conditioned by data-feeds provided by the actual users of the platform. The ability for a donor to see past transactions also provides full transparency into all donations carried out on the platform.

Fully trustless, intermediary free charitable donations of physical products governed by conditional payments from a donor to the producer/shop conditioned by the recipient's confirmation of the physical product.

Leveraging a distributed ledger's smart contracts, conditional payments and fully trustless designs, the innovative technology is brought to people who needs it but by introducing an "abstraction layer", the highly advanced technology is tugged away under the charity platform pollopollo.org, thereby allowing the benefits of fully transparent and trustless donations of physical products to be carried out. Donated funds are deposited on a smart contract making sure that only the provider of the product will be able to claim the funds if the actual recipient of the physical product confirms reception. If the receipt isn't provided by the recipient, donated funds are returned to the donor after a period of 30 days, thereby eliminating any and all 3rd parties in the process.

The project is 100% established, built, developed, marketed and run by volunteers. The few costs for required servers/webhosting is covered by the founder privately. The project has been granted a free license for a project management tool called Scrumwise. The IT University of Copenhagen accepted the PolloPollo project as a project students could work on as part of their studies, and could therefore be considered a benefactor as well. Other than that, the current support for PolloPollo is mainly provided by the Obyte distributed ledger in terms of creating short explainer-videos, helping potential users understand how the platform works.

The platform is actively being used and has so far provided chickens, chickenfood, vegetables and meat as source of food as well as enabled an entrepreneurial Venezuelan to start a small cookie shop by applying for donations of initial ingredients needed to bake his first batch of products to sell. There has been 150 donations carried out over a period of 4 months and more than 50 individual recipients have been given a much-needed way to provide food and basic necessities for themselves.