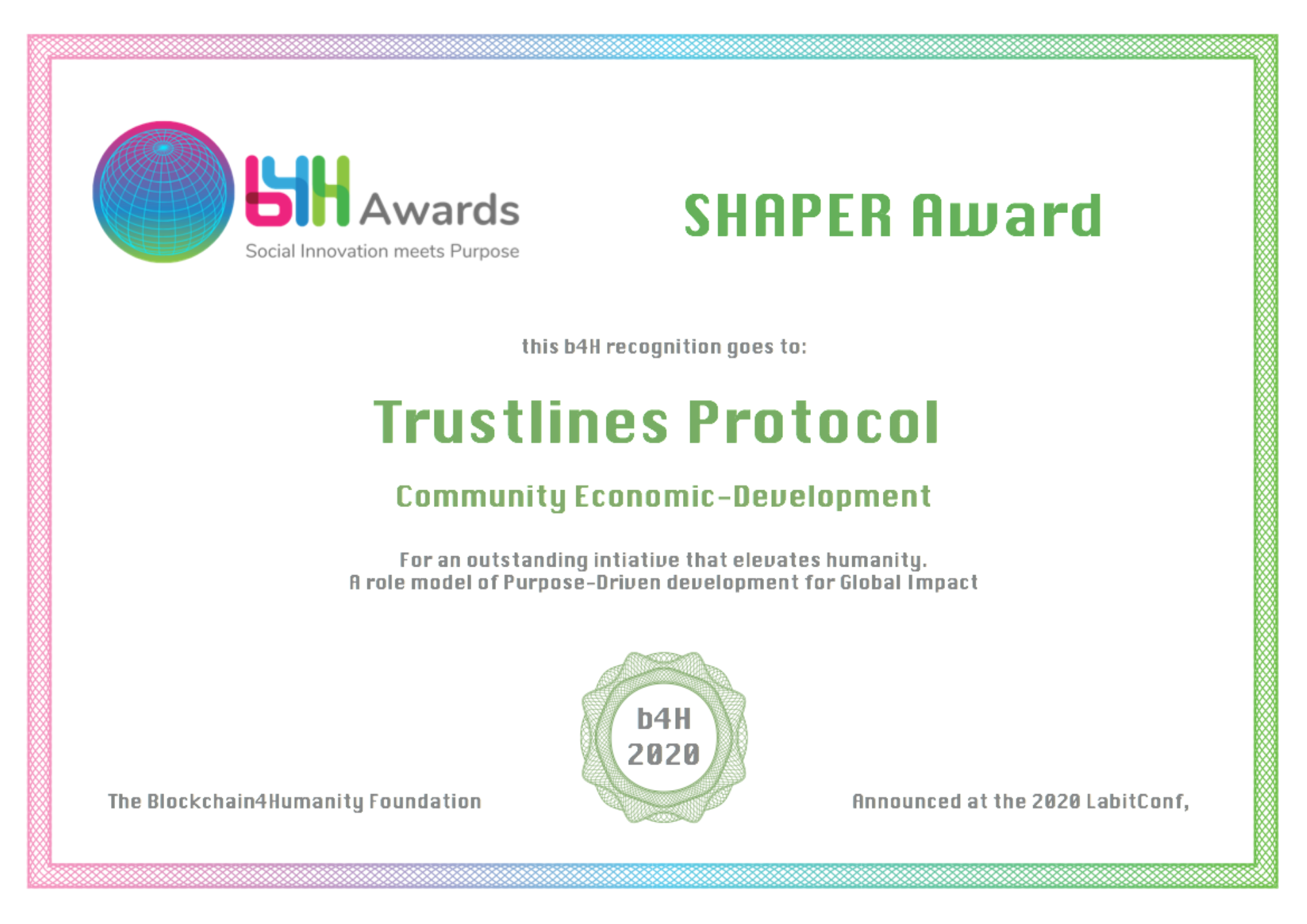 Trustlines Protocol is an open source technology stack for peer-to-peer mutual credit. Instead of government money or bank money, Trustlines enables communities to create payment systems out of People Powered Money -- in other words, using everyday “I-owe-you” agreements based on trust.

Trustlines is aimed at creating a universally accessible medium of exchange. This fits into Target 8.10 of SDG 8: Strengthen the capacity of domestic financial institutions to encourage and expand access to banking, insurance and financial services for all. Notably, Indicator 8.10.2: “Proportion of adults (15 years and older) with an account at a bank or other financial institution or with a mobile-money-service provider,” is highly relevant, since Trustlines is a type of mobile-money-service provider that allows users to transact without any government documents, and crucially also without the user depositing any money in the first place. This latter point allows everyone equal access to a medium of exchange, regardless of preexisting wealth. (https://unstats.un.org/sdgs/metadata/?Text=&Goal=8&Target=8.10 )

We can extrapolate from statistics presented by similar projects to predict the impact of Trustlines Protocol. The two examples provided are different community currency projects that can be replicated using Trustlines. The first is a timebanking system, which is one of the use cases for Trustlines. The second is a mutual credit system, diverging from Trustlines in that it uses partial collateralization to reinforce trust. Note that Trustlines is agnostic to collateralization and users could hypothetically mimic this model. Example 1: Timebanking. These statistics are provided by Tempo, a UK-based organization that organizes the use of time credits ( https://www.wearetempo.org ): -Time Credits members are two times more likely to be new to volunteering when compared with the national volunteer population. -71% of Time Credits members earn less than the national living wage. Nearly half (49%) earn less than £10,000 per annum. -72% of Time Credits members give their time to support others, either on a 1:1 basis (such as buddying or befriending), or on a group basis (such as running a peer support group). -Feelings of happiness increased significantly among Time Credits members. -71% of Time Credits members said that they felt less isolated and lonely since becoming involved in Time Credits. 43% of members said that Time Credits had helped them make new friends and acquaintances. -57% of Time Credits members show high levels of trust in others compared with 35% across the UK population. These are among the highest levels of trust globally. -There was a 12% increase in the average level of physical activity among Time Credits members along with an average increase of 2 hours per week among those who were already active. Example 2: Mutual credit with partial collateralization, in combination with direct cash transfers. Community Inclusion Currencies (CICs) are a type of community currency based on the logic of mutual credit, but with a fractional reserve, or partial collateralization, consisting of national currency. New participants can receive direct cash transfers in the community currency. Savings groups can mint new CICs, but the total amount of CICs that can be created are constrained by the collateral fund. Donors can purchase CICs from savings groups, at a rate of 1:1 with national currency, to support the peg. These statistics are provided by Grassroots Economics, a Kenyan-based organization that organizes the use of CICs (https://www.grassrootseconomics.org/post/covid-19-cic-response-500x): -Comparing transaction volume to donor aid since January there has been 18.3x the amount of trade volume compared to the donor aid injected. -There has been a huge increase in usage since COVID-19 and specifically in Mukuru, Kayaba where we started working with Red Cross on April 6th. In roughly a month, we have seen $95,600 USD worth of transactions on the network with 22,702 transactions via 2,588 users to which 12,700 CIC tokens have been distributed. -Comparing transaction volume to donor aid for Kayaba we see 34x the amount of volume compared to injected donor funds. -Note that out of the 2,588 registered users in Kayaba 2,072 were registered since April 6th (starting with 516 users). That is a growth of 501.5% since Covid-19.

There are several weaknesses to a monetary system created and backed by governments and commercial banks, and also to a monetary system based on mined or minted cryptocurrency. These systems cannot capture all the productive capacity of local economies. They may create a money monoculture which hampers local resilience to crises. They may also consist of volatile or arbitrary units of account, or have security flaws making it unsafe or unreliable to use. Many people are not even able to access this system at all due to a lack of identifying documents or else lack of wealth. These are structural problems that affect everyone, though it is the more vulnerable communities that suffer the most.

Trustlines has all the same security properties of other blockchain-based currencies. But using Trustlines addresses problems regarding money creation rather than infrastructure, making it fundamentally different from typical cryptocurrencies. The idea is an old one and could be implemented on a centralized database. However, the goal is financial inclusion, and centralized systems have security vulnerabilities that inevitably exclude the most vulnerable people. Using a censorship resistant blockchain allows anyone access to Trustlines without the barrier of producing government documents to gain access, and also without fear of censorship.

Concept Definition
Support of B4H Goals
External Funding If Any

Trustlines Protocol is currently in the process of scaling up its user base and community. The Trustlines Blockchain (TLBC) is a minimal viable Proof-of-Stake sidechain to Ethereum. It features anonymous validators and is intended to specifically host DApps which are aligned with the Trustlines vision. Blockchain launch: The Trustlines testnet, Laika, was launched on the 21st of November 2018. The mainnet launch occurred roughly one year later, in 2019. There have been two mainnet validator auctions since launch. The second auction concluding 23 June 2020 resulted in a total of 26 validator slots for 5,073 TLN per slot. Merkle drop: The goal for the Trustlines Foundation is to make Trustlines Network Coins (TLC) widely accessible. TLC is the native token of Trustlines Blockchain. If you have Trustlines Network Tokens (TLN), you can convert them to TLC via a bridge. To accomplish the goal of making TLC distribution as widespread and fair as possible, we conducted a token distribution called a Merkle Drop in December 2019, in which 40 million TLN (half of the total supply of TLN) were earmarked to be claimed by 418,128 anonymous Ethereum addresses with a history of participating in the ecosystem. Since then, 5,266,236 TLN have been claimed by 581 addresses. Currency networks: The Trustlines Foundation deployed 46 initial currency networks for anyone to use on the TLBC. The purpose of different currency networks is to let people choose their preferred denomination for recording transactions. Currency networks are shared platforms and are not controlled by a single party. Since launch, an additional two currency networks (Favors and Coffee) have been deployed by members of the Trustlines community. Website and documentation: There are extensive resources online about the Trustlines Network, featuring both technical and non-technical documentation,brand guidelines, social channels, a blog, and a forum. Trustlines App: The white label beta Trustlines App has been released for public download and there are currently about 300-500 users. The first community pilot occurred at EthCC in March 2020, an Ethereum conference. Chapter Model: The next step in scaling Trustlines will be to implement a chapter model. This will involve assembling further resources to help community leaders take initiative and use Trustlines in a way that fits their community the best. Communication between the Trustlines Foundation, developers, and chapter leaders will also help guide the evolution of Trustlines Protocol and the Trustlines ecosystem in the future.